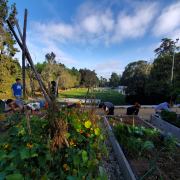 You’ve probably heard of food deserts. A lot of folks have studied, written about, and presented this issue in our industrialized food system. Importantly, a lot of folks may know what it is like to exist in and experience a space where access to fresh, affordable, and healthful foods is distant in proximity. But knowing about food deserts is different from existing in one.

I was not raised in a food desert and have an immense amount of privilege in writing about this issue, instead of actively worrying about it. I want to acknowledge this as I discuss and outline topics that are of utmost importance to me, but not directly impacting me.

Today I want to shed light on two concepts in the food justice realm: food apartheid and food sovereignty. It is in not only understanding these terms, but in bringing them into everyday vocabulary, academic papers, popular media, and policy write-ups to better equip us with an idea of how to address an unjust food system.

One way to direct the conversation around food inequity in America is to change our language.

The term food apartheid — versus food desert — more fully reflects that the lack of food access in communities like East LA or South Bronx or various rural and urban communities dispersed around the States is not a naturally occurring phenomenon the way the word “desert” implies. The phrase ‘food apartheid’ does not originate from me, but has been promoted by Karen Washington, a revolutionary community activist who addresses issues of intersecting forms of oppression of racism, health, food access, and poverty in New York. In an interview with Guernica, Washington described how the phrase food desert is an “outsider term”: people living in communities with low access to high-quality food do not describe their community as a “food desert”.

This struck a chord with me– despite its widespread use in the media, and in my very own essays– the term “food desert” does not capture the underlying reality of why there isn’t equitable access to healthy food. Washington advocates that the term “apartheid” better captures the entirety of the food system and invokes how social inequalities, implicit bias, and the racial worldview perpetuate a broken food distribution system. Racial inequities and capitalism, reinforced by large, industrial food corporations, are the roots of food apartheid.

We can take the example of how fast food chains are disproportionately present in low-income communities of color. When looking at the history of why and where McDonald’s franchises popped up, it’s clear that people in power used the allure of get-rich small business opportunities, like McDonald’s franchises, as a temporary, band-aid solution to equality in disenfranchised communities. It wasn’t a viable solution. It perpetuated “black capitalism,” which made owning a McDonald’s seem American, patriotic, and a means to gain social and political power. In reality though, McDonald’s franchising perpetuated a system of class and racial segregation with decades of health consequences, as described to Marcia Chatelaine’s Franchise: The Golden Arches in America. The inability for many BIPOC (Black, Indigenous, People of Color) communities to self-determine their food and health outcomes or to successfully resist the current cultural dominance of capitalist, corporate food systems, is an erasure of the history of oppression and the pinnacle of intersecting injustices: this is food apartheid as we see it.

So if capitalism can’t address food apartheid, what can?

Washington has some ideas. We can work to reduce the stigma around food pantries, and evolve these spaces to becoming accessible supermarkets that educate community members on how to prepare food. We could require charity organizations to transition leadership positions from founders or sponsors to actual community members.  Public policy can reallocate subsidies toward grass-roots food initiatives, allowing communities to reclaim their food distribution and access with collective food sovereignty.

Food sovereignty is a concept created and promoted by La Via Campesina in the 1990s as a global movement as “the right of peoples and governments to choose the way food is produced and consumed in order to respect livelihoods,” as stated by Indigenous and environmental scholar Kyle Whyte. To work against this exploitative and culturally-dominant food production model is to also exercise autonomy over food systems– to pursue and possess food sovereignty. For many BIPOC communities whose foodways continue to be threatened and diminished by the repercussions of settler colonialism, true autonomy over food systems would look like a collective agency over their ability to produce, engage with, and share food in culturally appropriate ways.

I’ve thought about how when we say food desert, there’s this implicit idea that follows: well, if we add plants and life and richness to the land, maybe it will cease to be a desert anymore. But this, according to activists and scholars like Karen Washington and Kyle Whyte, is not the case. This mindset is one that believes a pretty, convenient band-aid can fix the toxic wound of an unjust food system. It ignores that life and richness already exists in these communities, and fails to convey the truth of resources having been stolen and replaced by harmful franchises. It endorses a morally arrogant notion that people in power can heal a broken community, when in reality the power already lives in the community.  Changing language and inviting phrases like food apartheid and food sovereignty have the potential to rework the way we engage with topics of food access and food inequity. The language acknowledges a history of disenfranchisement, and empowers a sense of collective restoration for the future.

If you want to learn more about Food Apartheid, check out the recording of Eatwell’s Food for All Event online, featuring Karen Washington herself, among other leaders in the food justice and health equity.

Kayleigh Ruller is a third-year Human Biology and Society student, minoring in Food Studies at UCLA. Outside of Semel Healthy Campus Initiative, she leads the UCLA Farmers Market team, makes podcasts, and writes about the intersection of food, health, and culture. She finds inspiration by trying all the different restaurants in LA, drinking coffee to stay motivated, and cooking with her roommates in her free time!

Szalai, Jennifer. “The Surprising History of McDonald’s and the Civil Rights Movement.” The